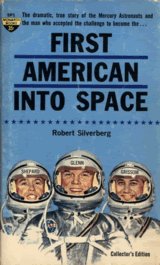 The first American is back from outer space, safe, sound, and ready for further adventures which, a few years back, would have been considered the pipe dreams of a science fiction addict.

Here is the spine-tingling, true story of that blast into the realm of the stars, of the men who underwent the rigorous training for that epic mission and of the one man who made the safe journey.

Here is a factual account of the history of rocketry, its triumphs and its failures, our shame in the neglect of it and our pride in later accomplishments.

Orbiting space stations? A man on the moon? A weekend on Venus or Mars? Here, also is a glimpse in the future — an honest appraisal of what can be expected in man's relentless drive to conquer the void that is outer space.

Navy Commander Alan Shephard, 37, father of two girls, 13-year-old Laura nad 9-year-old Juliana, had no desire to be a hero.

What drove him to volunteer for the potentially dangerous task of probing the void beyond our planet?

Mostly, it was the chance to serve his country in a role for which he felt well qualified, but also because he saw it as a personal challenge.

No daredevil, he has a great, restless, desire to do everything well, and then to do it a little better than the other fellow. As an astronaut, he would pit his strength against man and Nature with the added incentive of a thrilling ride beyond the Earth's atmosphere in a space capsule.

This unusual and timely book tells the whole story of Command Shephard and his fantastic journey into outer space.

Robert Silverberg is a native of New York City and attended Columbia University. He became interested in space travel while still in elementary school, and has watched each new development in space science with keen interest since the days of V-2.

He began writing science fiction when he was in high school, and his first novel, REVOLT ON ALPHA C, was published by Thomes Y. Crowell while he was still in college. He has written some twenty science fiction novels under a variety of names, and has better than 600 published short stories and articles to his credit, many of them science fiction. In recent years he has written fiction and non-fiction in many fields.

He is married and lives in New York City. His wife is an electronics engineer engaged in government scientific research.