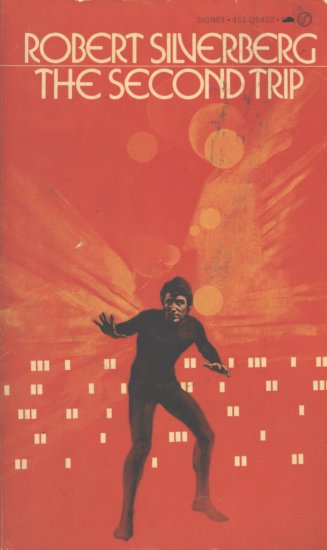 Was it a case of mistaken identity or demonic possession?

Hamlin, get out of my mind!

You heard me! You forfeited the right to this body when you became the mad rapist of suburbia four years ago. You were condemned to Rehabilitation. You're dead, Hamlin — deconstructed — why can't you stay that way?

I'm more alive than you are, Macy. You're just the imaginary creation of some second-rate doctor's mind. You have no reality, but I have. I'm the world's greatest psycho-sculptor, and you're nothing. I'm the one with the right to this body. So get out!

Never! This life is mine.

And then there was pain...

The Second Trip is the rather disturbing story of Paul Macy and Nat Hamlin, two personalities who share the same body. In this future, it is possible to obliterate a person's psyche and construct a new one for them. This extreme form of therapy is reserved for people deemed beyond the redemption of conventional therapy, and is seized upon by American society as a more humane way of dealing with criminals than capital punishment. This book also features one of Silverberg's most despicable characters: serial rapist Nat Hamlin. The main problem is that Hamlin's personality was supposed to be wiped out, erased from his brain, and replaced with the rather innocuous but sane construct called Paul Macy. By some fluke, however, Hamlin has survived, buried deep within Macy, waiting to be awakened by the right stimulus.

While I found the internal conversations between Macy and Hamlin often fascinating, they were also sometimes tiresome and repetitive. Still, on the whole, this is an interesting read. I hesitate to use the word enjoyable because it is in fact rather unpleasant at times. This is quite intentional on the author's part. He is, after all, depicting a deranged criminal. As with all Silverberg antagonists, Hamlin has redeeming features. He is a brilliant artist, able to capture subtle emotions in a medium called psycho-sculpture (some sort of high-tech sculpture that is not static). He can also be quite charming and was apparently darn-near irresistable to women before his breakdown.

One other observation I'd like to make is that from the moment I started reading this book, I had no idea where it was going to end up. The tone is so gritty, pulling no punches about unpleasant subject matter, that nothing would have seemed out of place. I must say Silverberg pulled it off amazingly well. While I wouldn't rate it as one of his very best books, it is fascinating and frightening and holds up well today.

In a newsgroup posting dated 1/21/05, RS commented on The Second Trip: I read it again a few months ago after not having looked at it for thirty years or more and was quite taken by it. Some of my earlier books are now so old that I don't remember them very well, and I can read them with the fresh eye of a new reader. SECOND TRIP impressed me mightily. Half my life ago, that one was, and the prose is full of the zing and zip of the young writer I was then.