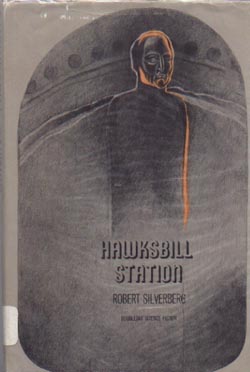 The complex, involuted collection of unfathomable instruments burned a bright cherry red now, betokening the surge of who knew how many kilowatts being pumped in by the generators at the far end of the line, Up Front. There was a hissing in the air; the floor rumbled faintly. The glow had spread to the Anvil, now, that broad aluminum bedplate on which all shipments from the future were dropped. In another moment—

The men of Hawksbill Station were outcasts and exiles; their world was a billion years away—lost to them forever.

They were revolutionaries and anarchists; political dissenters banished, rather than executed, by the Big-Brotherly governemt of the twenty-first century—banished a billion years into the past, to the gray and barren world of the late Cambrian age.

It was a one-way ticket to madness and despair. Death was the only pardon.

Jim Barrett was the acknowledged leader at Hawksbill Station. He did his best to hold the men together but he was getting old, he was crippled and very tired and disintegration was slowly undermining the bleak little colony. Altman was building a woman he hoped to animate with lightning, like Frankenstein's monster; Latimer was trying to reach his own world with ESP; Galliard spent his days praying for alien beings to rescue him from his misery.

And then a newcomer dropped into their midst, a man who puzzled, and troubled Barrett. He was too young to be a political prisoner, he seemed to know almost nothing about hte world he just left and he refused to answer any direct questions. And Barrett had the uneasy feeling that something was about to happen to all of them...

This novel is an exciting, new slant on the time machine theme, set in the complicated political world on the future and the empty world of the prehistoric past. But the men who move throught these worlds are the men of any age who have given themselves to a cause and paid a terrible price for their beliefs.