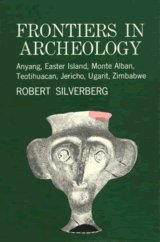 Anyone who feels that there are no cultural universals should read this book. The common interests and achievements of archeology bind all nations together, in a way which ought to be studied by the United Nations. In the wonderful stories in this volume, uncovered by scientists of many lands, Robert Silverberg has shown what supra-national endeavor can do.

The Biblical (and pre-Biblical) Jericho came to life from the work of Warren, Garstang, Kelso and Kathleen Kenyon, all British.

Mysterious Ugarit, ancient frontier port of Egypt, was unveiled by Schaeffer, a Frenchman, and its language deciphered by Bauer, a German.

The riddles of the legendary Shang dynasty of China, and its semi-mythological capital of Anyang, were worked out by Li Chi, a Chinese scholar.

Zimbabwe, the lost city brooding for centuries in tropical Rhodiesia was discovered by Mauch, a German, and its identity resolved by Randall-MacIver and Summers, of England.

On the Mexican plateau, the successions of the Zapotec, Toltec and Aztec cultures have been examined by men of many nations, but MacNeish, and American, has uncovered the origin of corn (maize), the staple of the Western World.

And finally, the ancient puzzle of Easter Island and its monolithic stone heads has been brought to life by Katherine Routledge of Britain, Heyerdahl (of Kon Tiki fame), a Norwegian, and Metraux of France.

Once again, this gifted author weaves his spell and plunges the reader into the ancient past, showing how modern science has uncovered, and is still uncovering, the secret frontiers of archeology, the forgotten life of the past.

Dedication: For Jerry Mundis, who didn't have many idle moments.