Home of the Red Man: Indian North America before Columbus 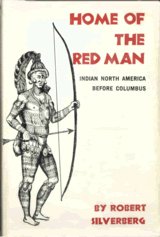 HOME OF
THE RED MAN

We all know that 1492 is the correct date of Columbus's discovery of America. But actually it had been discovered thosands of years before by the people we call American Indians. By 1492 they occupied North America from the Pacific to the Atlantic, from the Great Lakes to the Gulf of Mexico.

Who were they? Where did they come from? What did they look like? How did they live? What language did they speak?

These are only some of the questions answered in this book about these endlessly interesting first Americans. Some of the facts are: the original inhabitants almost certainly came from Asia; over 600 languages were spoken by about three million people; there were no horses at all until the Spanish brought them. And of course, the people were not "Indians" at all! Columbus was so sure that he had found a route to the Orient that he named the inhabitants of the new land incorrectly but firmly.

Their existence in America before white men came is sure to interest everyone who enjoys archaeology, history and a good mystery.

ROBERT SILVERBERG is the author of many books for young people about the worlds of the past, including LOST CITIES AND VANISHED CIVILIZATIONS and SUNKEN HISTORY. He sold his first manuscript when a college sophpmore, and has been a full-time writer since his graduation from Columbia in 1956. A lifelong New Yorker, he now lives in Riverdale in a house which was formerly the home of Fiorello La Guardia.