If I Forget Thee, O Jerusalem 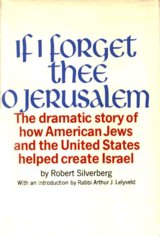 The dramatic story of how American Jews and the United States helped create the state of Israel.

This is the first difinitive, dramatic account of the often moving and always fascinating story of American involvement in the creation and development of the Jewish national home.

Evoked in these pages are momentous events: the birth of Zionism, its blooming in the United States, Europe and Palestine, the at times fearsome battles among American Jews over the issue of a Jewish state and the behind-the-scenes interplay between American Jewry and the United States Government over the founding and support of Israel.

Revealed too is the ironic role played by Franklin Delano Roosevelt, who, during his lifetime, was a hero to most American Jews. Yet during the years of the holocaust President Roosevelt failed to come to the aid of Europe's Jews and he secretly told Arab statesmen he did not intend to keep the promises he publicly made to America's Jewish leaders. In contrast, it was Roosevelt's successor, Harry Truman, who finally agreed to back the Zionist cause.

But this is more than an account of an extraordinary campaign, unique to American and world history. It is also a tale of high and urgent drama: refugees fleeing Hitler's Europe on ships run by American captains; airplanes smuggled from the United States to the Middle East; the tense days in America and Israel as the Jewish state came into being; the Suez crisis, the Six-Day War and much more.

About the Author
Robert Silverberg spent two years researching this book in Israel and the United States where he interviewed many of the participants. A professional writer since 1955, Mr. Silverberg is the author of a number of books on scientific and historical subjects.