The Loneliest Continent: The Story of Antarctic Discovery 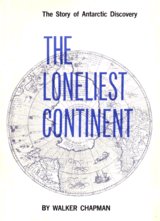 Across the bottom of the earliest maps of the world, as ships began to venture out of the safety of European waters, appeared one ominous and uninviting word: Fog.

Yet belief in the existence of a mysterious land mass to the South – inhabited, perhaps, by mysterious monsters — persisted from ancient times through the great ages of exploration. This is the story of the discovery of Antarctica: the heroic probing by persevering men of many nationalities into the forbidding ice-bound fastness of the last unknown continent.

Mr. Chapman, beginning with the imaginative ideas of early Greek philosophers, tells of the first South Sea voyages, the rugged adventures of the sealers and whalers of the 18th and 19th centuries, and the first major American expedition — prompted by the speeches and writings of a gentleman who believed that habitable worlds inside the earth could be reached through great holes at the Poles.

The more scientifically oriented expeditions of this century are described in detail. Mr. Chapman brings to life the courage, ingenuity, and sheer physical stamina of Scott, Shackleton, Amundsen, Byrd, Hillary, and Fuchs and their companions, pitted against merciless conditions of weather and geography.

The final chapters of the book review the recent advances made in the International Geophysical Year, and the richness of the resources modern science can unlock for the future in this frozen world — as well as the present status of international claims to a land which Captain Cook, one of its first visitors, dismissed as utterly worthless.

WALKER CHAPMAN, born in New York City, spends his time (when not at the typewriter) travelling, gardening and collecting rare books. His special interest, both as a reader and writer, is exploration and discovery. Mr. Chapman is married and while his wife generally accompanies him on his travels, she says she does not wish to go along when and if he makes his often-discussed journey to Antarctica.