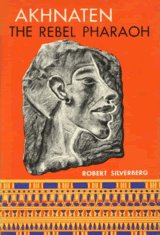 He has been called the world's first idealist, the first temporal ruler ever to lead his people toward the worship of a single God. His name was Akhnaten, the strange Pharaoh whose influence on history went far beyond Egypt and far beyond his era. Here Robert Silverberg brings to life one of the founders of the modern world.

When Akhnaten came to the throne more than 3000 years ago, Egypt dominated the world. But behind this panoply of power was a cowering citizenry plagued by gods and demons conjured up by a sinister priestcraft. Akhnaten swept aside old gods and demons. Then, creating his own priesthood, he proclaimed a new religion—a religion of a single God. This visionary Pharaoh, more interested in philosophy than power, was unlike any other Egyptian ruler. When he introduced his concept of monotheism, Akhnaten was at an historic crossroads, for, at that point in time and place, the Hebrews were in Egypt. The author explores the relationship between Akhnaten's religion and the Hebrews' religion, and in the light of modern archaeological findings, he compares the spirituality of Akhnaten and Moses.

Akhnaten: The Rebel Pharaoh is more than the story of a man and his personal imprint of history. It is also the story of the grandeur that was Akhnaten's Egypt, a land where men, released from the bondage of a fear-laden religion, produced a magnificent civilization. In the new environment Akhnaten fostered, minds bloomed and artists flourished. The artists immortalized Akhnaten's queen, Nefertiti, whose serene beauty still lives today in works of Egyptian art.