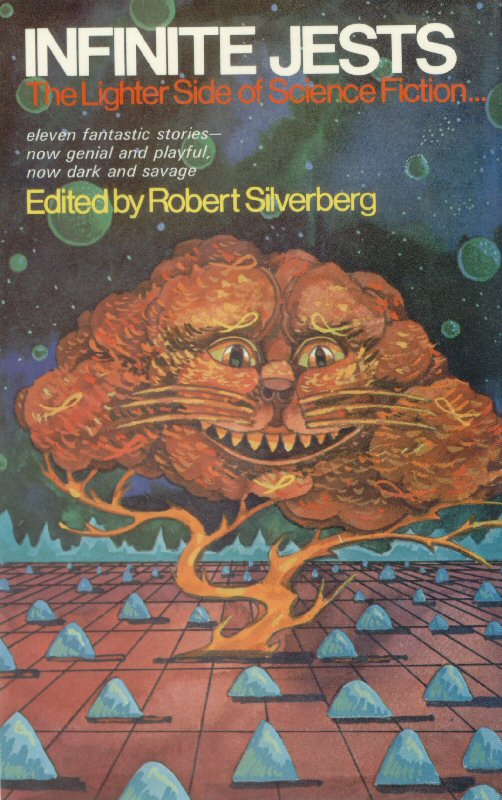 INFINTE JESTS
The Lighter Side of Science Fiction

If it sometimes seems that science fiction takes itself too seriously, here is an antidote. Robert Silverberg offers you a chance at some often grim cosmic laughter. Here are 11 stories by as many present-day successors of Swift, Huxley and Kafka. Though the adventures are sometimes many worlds apart, each proves that in its world, as in ours, the realm of laughter lies not very far from the realm of tears.

In William Tenn's VENUS AND THE SEVEN SEXES, a has-been of a Hollywood movie director brings "civilization" to a race of tasty creatures. Damon Knight's BABEL II introduces a trader from another dimension whose visit unwittingly threatens a Biblical doom. Joanna Russ' USEFUL PHRASES FOR THE TOURIST gives a wry glimpse of the galactic future and of what travelers may have to confront in the way of real cultural shock. CONVERSATIONAL MODE by Grahame Leman brings us face to face with an implacable computer-inquisitor within whose multi-moded mind sanity and madness aren't so very far apart. British science fiction master Brian Aldiss' HERESIES OF THE LARGE GOD initiates you into the mysteries of a deity whose advent means planetary calamity. In NOW + N, NOW - N, Silverberg himself offers an updated French bedroom farce in which a frantic Wall Street investor with the gift of seeing into the future and the past has his livelihood jeopardized by a beautiful woman with an even stranger gift. R.A. Lafferty's SLOW TUESDAY NIGHT is a lighthearted look at a fast-moving segment of the universe. In Avramn Davidson's HELP! I AM DR. MORRIS GOLDPEPPER, a prosaic dentist gets himself into a mess. Oy vey, who'll get him out? Philip K. Dick's OH, TO BE A BLOBEL! enlightens us on the problems of waging interplanetary war and what to do with alien war brides. HOBSON'S CHOICE by Alfred Bester is a dark, slick story of a homeless organism that makes you wonder if you'd like to try time travle after all. And science-fiction master Frederick [sic] Pohl's I PLINGOT, WHO YOU? makes the acquaintance of a destructive alien moster who's got his own problems back home.

Robert Silverberg, one of the premier science-fiction authors and editors, has won two Hugo and three Nebula awards. Mr. Silverberg's previous books with Chilton include LOST CITIES AND ANCIENT CIVILIZATIONS, EMIRES IN THE DUST, THE GREAT WALL OF CHINA, and AKHNATEN. Born in New York City and educated at Columbia University, he now lives in Oakland, California.