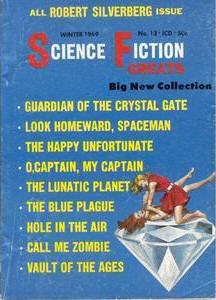 The summer of 1955 was a hot and dreary one in New York City, setting records every day for temperature and humidity. But in a decrepit apartment house on West 114th Street, in the shadow of Columbia University, an eager, bright-eyed, beardless young man labored tirelessly over a smoking typewriter, turning out science fiction stories night and day with the furious energy of one who has just started to sell fiction regularly, and who is afraid to rest for a moment, lest the spell of success be broken.

That busy young man was Robert Silverberg. He was not the only busy writer in the building at the time, for next door to him lived a certain Randall Garrett, and one flight down dwelled a refugee from Ohio named Harlan Ellison, and they, too, made their typewriters hum. But I look back with awe on Silverberg's exploits of that summer, for I am Robert Silverberg too, older, wearier, no longer beardless, and I wonder how I did it. The 18-hour working days, the feat of writing a complete novel in less than a week, the novella produced between midnight and dawn — these are things I'd scarcely want to attempt, today.

Most of the stories in this issue of SCIENCE FICTION GREATS were written that sticky, joyous summer, or in the months immediately following-turned out in that early rush of energy.

Looking at them now, I can see much that I'd do differently, changes I'd make in plot, style, character development. But such meddling across the timelines is improper. My younger self would have resented it if his stuffy elder self suddenly appeared and began tinkering with his work. Here are eight tales out of the past. Think kindly of them and of that ambitious young man in the humid room, thirteen summers ago.
—Robert Silverberg