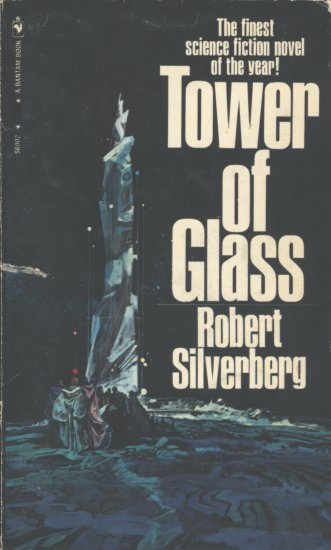 Simeon Krug's obsession was to see a tower built, one kilometer high, that would reach out to answer the voice from space. The Androids were his tools and he was their God.

Simeon Krug designed and created the androids in an era of human underpopulation and labor shortage in response to the poor decision-making and lack of creativity of mechanical robots. In chemical vats, the building blocks of life are assembled into living, thinking synthetic humans. By design, androids are distinct from natural humans in a number of ways: their skin is a bright scarlet color, they have no hair, and they are incapable of reproduction. There are three classes of androids: the gammas, designed for strength and reliability but not very smart; the betas, designed for supervisory roles, smarter than gammas but also strong; and the alphas, designed for intelligence and leadership. You have to suspend your disbelief to imagine such a project actually getting off the ground over moral objections, but once you do the story unfolds very compellingly. The androids especially come alive, with their hopes and dreams of freedom, and their religion devoted to their creator.

Aside from the androids, the other main focus of the book involves Krug's project to respond to the mysterious message from space, the first proof of extraterrestrial life (rather like the movie Contact). It is for this purpose that he builds the tower, for it is a giant transmitter with the sole purpose of answering the signal.

The technology of shunting (from Ringing the Changes) figures prominently in the story, as do transmat booths, teleportation devices allowing instant transport around the globe.

Nominated for Nebula Award for best novel, 1970. I probably would have voted for it had I been eligible.