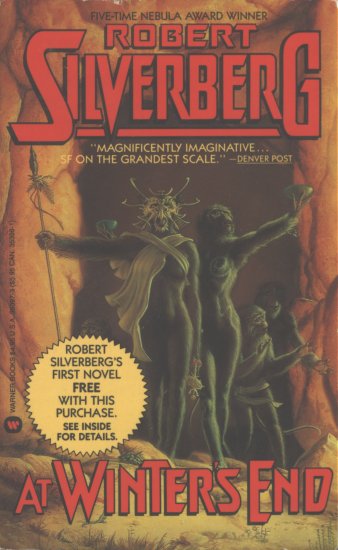 For 700,000 years the falling death-stars have locked the Earth in an endless winter of sorrows. For 47,000 generations Koshmar's tiny tribe has survived beneath the ice. Now prophecies proclaim the time has come to emerge and inherit the lost ruins of a new world.

A world where ancient enemies are real, but ancient gods have no power. Where a child knows more than the wisest elder. Where every step brings fresh wonder and feverish terror. Where prophecies lead to the fabled city of the Great World. And where Koshmar's people, primitives amid the ruins of an interstellar civilization, will find their foretold destiny. But other tribes — some not human — are also emerging into the New Springtime. With other prophecies of their own...

This is a far-future story set on Earth, hundreds of thousands of years in the future, when the earth is coming out of a long Ice Age induced by death-stars. The planet has been populated by numerous intelligent species descended from insects and plants as well as humanoids; but actual humans are nowhere to be seen, departed for the stars long ago. The story continues in The Queen of Springtime. There was a third book planned, but never written.

You only have to look at the Michael Whelan's lovely cover art from the original US paperback to see that the cover blurb is misleading: Koshmar and her people are not human, at least not Homo sapiens, though in the book the characters sometimes refer to themselves as human. As the story progesses, some of them discover of the older meaning of that word.

The people of Koshmar's tribe have adopted some very interesting (and practical) strategies to survive long millennia in the confinement of caves. For one thing, breeding is strictly regulated, with only certain individuals allowed to produce young. Non-breeders seem to be favor same-sex relationships, like that of Koshmar and her twining-partner Torlyri, both female, though heterosexual coupling is common. They seem to have some unspecified method of birth control. Life-spans are limited to thirty-five years, after which individuals depart from beyond the hatch, presumably to die in the harsh outside world; their bones litter the hillside below the hatch. The chronicaller, or tribe historian, is the only exception, as thirty-five years would not be long enough to learn all the tribe's history.

Quite an enjoyable book, and my sister's all-time favorite Silverberg novel.