by Robert Silverberg and Karen Haber 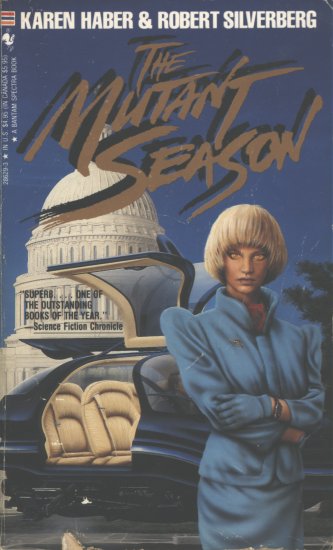 Winter is the mutant season.

When winter comes the mutants gather.

They have always lived in the shadows, invisible.

Now they will be tested. The first mutant leader to emerge into the light of public life has been murdered. Finding her assassin has fallen to the clan, a clan already beset by the pressures of the normal world.

Michael, torn between his mutant clan and a normal lover.

Melanie, alone among the mutants and rejected by the normals.

Jena, willing to use her mutant powers and her sexual wiles to get what she wants—Michael.

As society faces the implications of human evolution first-hand, and political maneuvering threatens to tear the clan apart, the mutants must find a way to protect their identity, their lovers, their very lives.

This book finds Silverberg collaborating with his wife, Karen Haber, in a longer work based on the short story of the same name. According to the Introduction, this book was written at the instigation of Byron Preiss, who saw in the story the seeds of an interesting future history. After rereading the original story, Silverberg and Haber worked out the characters and situations (with "considerable modifications" he says). Then she wrote the first draft, he went through it, she produced a second draft, and so on until it reached its final form. There are three more novels in the series (The Mutant Prime by Karen Haber, is the next one, and is set 15 years after this book).

The story is actually much more complicated than the blurb would indicate, and Michael, Melanie, and Jena are only three of many characters. There's also Eleanor Jacobson, the mutant Senator from Oregon, who plays a prominent role until her assassination; Andie Greenberg, Eleanor's non-mutant aide, who feels strongly that mutants should be treated equally; Kelly McLeod, Michael's non-mutant girlfriend; Stephen Jeffers, the mutant replacement for Jacobson in the Senate; and associated family and co-workers for all of these, as befits the lengthy multigenerational saga which begins here.

A word about the mutants in the scenario. These are not X-Men type mutants. Here's the general idea: Starting around 600 years ago, people began being born all around the earth with abilities beyond those of normal humans: clairaudience, telekinesis, and so on. The only outward sign of their mutation was a golden color to the irises of their eyes. For centuries they kept away from public attention, fearing the persecution that too often accompanied discovery. They banded together into Clans, formed communities of their own, developed their own society outside the mainstream of human life, and married only other mutants, partly because no one else wanted them, partly in hope of perpetuating the gifts they had into future generations. The vast majority of mutants have one power or another; a small number have two powers. As expected, when the mutants went public in the 1990s, not all normals were thrilled by the prospect of mutants among them. At the time this story takes place in 2017, there's still a lot of discrimination (technically illegal, but widespread nonetheless), and even the most open-minded normal probably wouldn't want his daughter to marry a mutant. There is talk of the development (either naturally or by genetic manipulation) of a super-mutant, which would have powers much greater than garden-variety mutants.

This novel is the basis for a 2010 French TV adaptation.