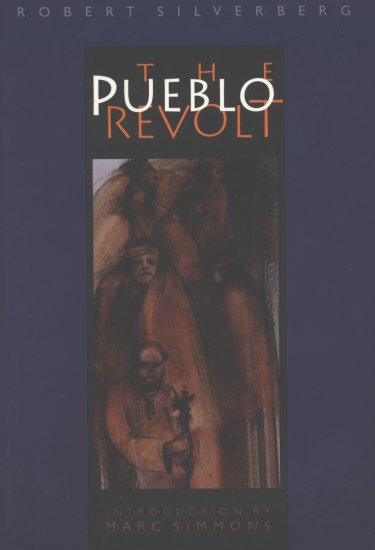 (From University of Nebraska Press 1994)

The peaceable Pueblo Indians seemed an unlikely people to rise emphatically and successfully against the Spanish Empire. For eighty-two years the Pueblos had lived under Spanish dominion in the northern part of present-day New Mexico. The Spanish administration had been led not by Coronado's earlier vision of gold but by a desire to convert the Indians to Christianity and eke a living from the country north of Mexico. The situation made conflict inevitable, with devastating result.

Robert Silverberg writes: "While missionaries flogged and even hanged the Indians to save their souls, the civil authorities enslaved them, plundered the wealth of their cornfields, forced them to abide by incomprehensible Spanish laws." A long drought beginning in the 1660s and the accelerated raids of nomadic tribes contributed to the spontaneous revolt of the Pueblos in August 1680.

How the Pueblos maintained their independence for a dozen years in plain view of the Spaniards and how they finally expelled the Spanish is the exciting story of The Pueblo Revolt. Robert Silverberg's descriptions yield a rich picture of Pueblo culture.

Introducing this Bison Book edition is Marc Simmons, a professional historian, editor, translator, and the author of Witchcraft in the Southwest: Spanish and Indian Supernaturalism on the Rio Grande (1980), also a Bison Book.

One of several books Silverberg wrote on the subject of Native American history and culture. See also The Mound Builders and The Old Ones.

It should come as no surprise to those familiar with Silverberg's work that the Spanish conquistadores are not painted in a particularly favorable light here. On the other hand, he avoids the noble savage cliché as well – the Pueblo people were not without their faults and infighting, though it is quite clear they neither asked for nor deserved the harsh treatment they received at the hands of the enlightened Europeans doing the work of the Lord. Aside from the human interest of this story, it is worth noting that this revolt, so little noted in American history, stands as the single most successful battle the Natives ever won against the foreign invaders, and the only one that resulted in any lasting (though not perrmanent) peace.