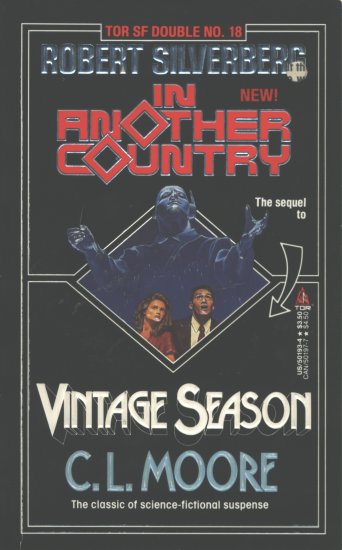 A novella written at the suggestion of Martin H Greenberg, who edited a series of Tor Doubles which contained a classic novella from the Golden Age and a modern novella written to go with it. Silverberg chose his favorite work by CL Moore, a writer he admires greatly, and wrote a complementary story (not a sequel, as the book cover proclaims).

Moore's story concerned Oliver Wilson, an average guy living in an American city (which shall remain nameless) in the latter half of the twentieth century. He owns a house. Not an especially wonderful house, but suddenly he finds it to be highly sought-after. Three people have rented it for the month of May under mysterious circumstances and for quite a bit more than it's worth. Then he gets an offer to buy the house, also for well above the market value. But the contract for the rental is signed, and he can't get out of it. Unless... He decides to stay in the house for the month and make such a nuisance of himself that the renters will leave. When they show up, he finds them to be a strange bunch. Elegantly dressed in unidentifiable fabrics, speaking English extremely properly, moving like trained dancers. Where are they from? Why are they here?

Silverberg's story is told from the other side. It turns out Oliver's visitors aren't the only strangers in town that May, and they are the focus of In Another Country. Without giving much away (it's really a very good story, and so is Moore's—you should read them yourself), there are some points of similarity with The Far Side of the Bell-Shaped Curve.