Antarctic Conquest: The Great Explorers in Their Own Words 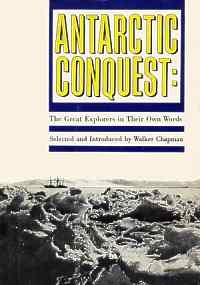 This brilliant anthology throws the spotlight on an exciting panorama of more than five centuries of exploration on the world's most remote and lonely continent. Amerigo Vespucci was the first to describe it when he saw it in 1502. The Elizabethan explorers thought that behind the ice lay a fertile continent surrounding the South Pole. Captain James Cook, the first to cross the Antarctic Circle, was also the first to dispel this particular notion. Cook, however, felt himself to be at the ends of the earth, and that no man will venture farther than I have done.

The Whaling and Sealing era made exploration a by-product of commerce. It was Edward Bransfield, a British whaler, who was the first to see the Antarctic continent itself — in this case the northern tip of the Antarctic peninsula.

In the nineteenth century international competition developed among the French, British and Americans, and it was this competition that gave rise to the heroic age of Antarctic exploration. Scott, Wilkes, Ross, Amundsen and Shackleton are among that band of brave men who, in their own words, still stand forth as larger than life size.

Admiral Richard Byrd remains the outstanding symbol of the Age of Mechanized Exploration, and his work in Antarctica assumes the nature of a climax of all that has gone before.

These men not only were great explorers but were able also to transmit to words their vision of a great and trackless landscape and its importance to mankind at large. Walker Chapman has made a masterly selection of their writings and woven them together into an historical narrative as exciting as it is important.

This book and The Lonliest Continent can be seen as companion volumes, with this one collecting some of the source materials for the other.