The Book of Skulls 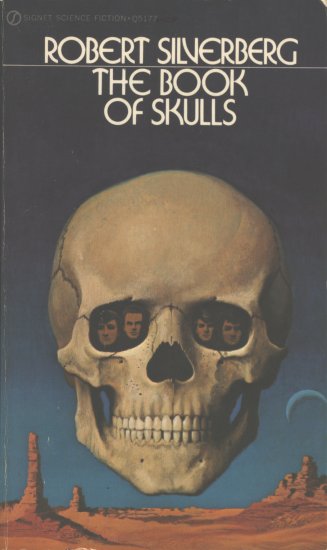 From the Book of Skulls comes the secret of life:

"The Ninth Mystery is this: that the price of a life must always be a life. Know, O Nobly-Born, that eternities must be balanced by extinctions, and therefore we ask of thee that the ordained balance be gladly sustained. Two of thee we undertake to admit to our fold. Two must go into darkness... Is there one among thee who will relinquish eternity for his brothers of the four-sided figure...? And is there one among thee whom his comrades are prepared to sacrifice...? Let the victims choose themselves..."

Four college students journey into the desert seeking the Brotherhood of the Skull and eternal life. But whether the promise of eternal life is real, and which two must die so that the others may attain immortality, only the grinning skull among the rocks can say for sure...

In spite of the fact that it isn't science fiction by any definition I can think of, The Book of Skulls was nominated for Nebula Award for best novel, 1972. I don't really mind, though, since it's an absolutely wonderful book. The four students are Eli, Jewish kid from Manhattan with a flair for dead languages, Timothy, upper-crust product of massive wealth and private schools, Oliver, orphaned pre-med farm boy from Kansas, and Ned, gay lapsed Catholic. (How's that for thumbnail portraits? In the novel, the four are much more complex than any few words can sum up.) After Eli comes across an illuminated manuscript of the Book and translates it, he talks his roommates into an Easter break road trip to Arizona, where he believes the Brotherhood of the Skull now resides.

The book is told in revolving first-person chapters, presenting the story from four points of view. The journey brings them all face-to-face with their deepest fears and secrets, and what it does to them, and their relationships with each other, is the main focus of the story. I was quite impressed with the portrayal of Ned, probably one of the first prominent homosexual characters in a high-profile science fiction novel. The sexual escapades (and there are many — after all, it's the free-wheeling post-hippie era) are explicit without being pornographic, and are never gratuitous. I can't recommend The Book of Skulls strongly enough, though I suppose it might not be everyone's cup of tea.

A movie version is in the works as of the latter part of 2005, scheduled for release sometime in 2006, directed by Exorcist director William Friedkin.