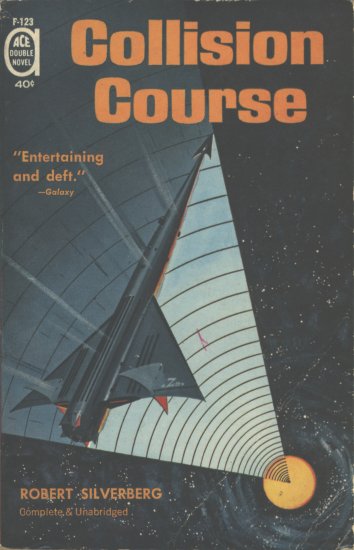 After four centuries of space travel Man was supreme. Human civilization had spread to hundreds of planets, and never, never had the colonists found a trace of another intelligent species. Humanity was alone, with the entire galaxy to command.

And then the unthinkable happened. An experimental ship, probing far beyond Earth's most distant outposts, discovered a new colony

This was originally intended as a two-part serial for Astounding Science Fiction, but editor John W. Campbell rejected it for it having a fundamental philosophical error, as Silverberg tells it in the introduction to many of the editions, so it ended up in a single issue of Amazing. In Campbell's view, the human race was naturally superior to any other intelligent species (we simply have to be), and any stories suggesting that an alien race could be more advanced than Earthmen was simply wrong. This book shows signs of Silverberg's maturing talents, as well as his recurring themes (arrogance brought down, distrust of authority, sympathy to opposing philosophies), and doesn't fit in with Campbell's unquestioning humans-first ideas.

The back cover blurb for the 1982 Ace edition is very accurate (if vague) about the main plot; the 1988 Tor edition is also essentially correct, though it skews the book's main points significantly. The fatigue of the crew of the expermental faster-than-light ship is a relatively minor point, and none of the crew are really major characters. The focus is primarily on Dr. Martin Bernard, a British sociologist recruited as part of the negotiating team. The squabbling mentioned is primarily between Bernard and the team's linguist, Dr. Thomas Havig, who is the follower of a religious sect called Neopuritan who believe in simplifying their lives and rejecting pleasure. While Havig is the butt of some jokes by the others, he is actually treated with quite a bit of respect as far as the narrative is concerned, redeeming his annoying attitude of moral superiority with extreme competance when it comes to establishing communications with the aliens.

I was interested in the political situation presented in the book, though it is not really unusual for science fictin of its vintage. Earth of the 28th Century is ruled by a single government overseen by a council of thirteen Archons, each responsible for a distinct sphere of influence: Techonology, Education, Agriculture, Health, and so on. The Archon of Technology, or Technarch, is the most powerful of the group, though the Geoarch is theoretically the leader. A brief background is given, in which centuries of conflict and disaster were ended by the first Archons taking power. The implication is that individual nation-states (especially ones adhering to the chaotic system called democracy) are inherently incapable of maintaining stability. While the bulk of the human population seems to be quite content with the authoritarian system, a few characters do voice discontent.

The technology also presents an interesting situation. On Earth, and between the human-settled planets, teleportation booths provide instant transit to any point where a booth can be built. Slower-than-light ships are sent out to find new planets, and once a new world is discovered, a transmat booth is immediately built. The Norglans apparently use a very similar strategy. The development of the FTL ship will dramatically change the status quo, eliminating the slow step of finding new worlds. It is not explained why they couldn't simply put a transmat booth on the FTL ship and teleport the negotiators to the Norglan colony rather than suffering the ordeal of the transit. There are a couple of other minor plot points that nagged at me, but not any serious enough to ruin the story. All in all, this is one of the better Silverberg books of the 50s, and holds up quite well today.

Vincent Di Fate's illustration is a more or less accurate depiction of the Norglans, though it is dark and doesn't show much detail. The old Ace double cover does actually depict a scene from the book, though describing exactly what's going on would give away a plot twist.

While I don't want to give away any plot points, I would like to note that the final resolution is remarkably similar to the original Star Trek episode called Errand of Mercy—but probably not enough so to indicate any sort of influence or plagiarism.