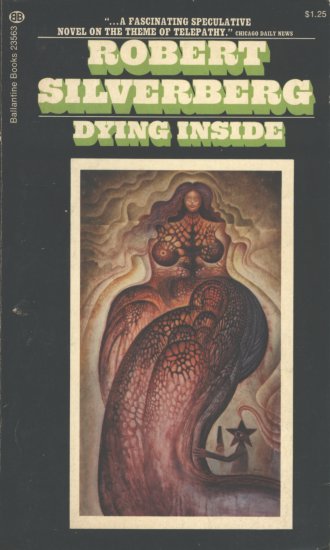 The stunning novel of a man blessed and cursed by the amazing gift of being able to peer into people's minds, to read thoughts, to know their feelings, and to hear their unspoken lies...

The remarkable life saga of David Selig, a boy like any other yet like no other...growing up, falling in love, protecting himself from things he does not want to hear, and eavesdropping on all that he does...

The chilling story of what happens when David's power begins to ebb...stranding him slowly in an incomprehensible alien world, leaving him outwardly living — but dying inside!

Nominated for Nebula Award for best novel, 1972, and with good reason. It's an extraordinary book, brutally honest, hypnotic, literate, and intense, presented in a style that's nearly stream-of-consciousness, with excerpts from letters and papers, drifting freely from first to third person narrative, frequently addressing the reader directly. The science fictional elements are not really pre-eminent – it's more like a really good mainstream novel that happens to involve a telepathic protagonist – and probably seem less so today than when it was published. The setting is New York from around 1940 to 1976, so there isn't much in the way of predictive speculation.

One can't help noticing autobiographical elements in Selig – a non-religious Jewish boy from New York, born in 1935, a graduate of Columbia, very well read in both classics and science fiction, with a predilection towards self-analysis and gloominess. Selig is very much what Silverberg might have been, given this extraordinary gift. The examination of the impact of receive-only telepathy is quite thorough, including such variations as meeting another telepath, meeting someone you're unable to read, trying to link during sex, reading the minds of animals and babies, the effects of drugs, and many more. The most striking thing about the story is that, far from being the success you might imagine given his power, Selig is a loser, unable to cope with the guilt he feels at prying into people's minds, unable to use the power to do or become anything useful. This stands in marked contrast to most other stories about telepaths.

In 2001, the BBC did a radio adaptation of this novel.