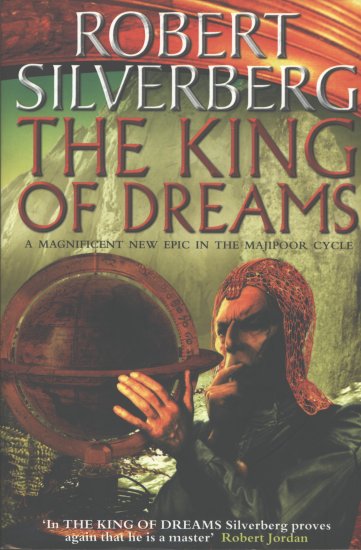 At last Prestimion prepares to take his place in the subterranean Labyrinth where the Pontifex must dwell. He has named Prince Dekkeret to succeed him as Coronal. Once a commoner, Dekkeret brings new blood to the aristocratic Starburst Throne, and a popular wisdom. Another prosperous joint reign should begin.

But the diabolical Mandralisca is the éminence grise behind a declaration of independence from distant Zimroel. Coolly proclaiming the five debauched nephews of the treacherous Dantirya Sambail to be the Five Lords of Zimroel, Madralisca is preparing to destroy the unity and peace of Majipoor.

The soothsayer Su-Suheris predicts that a new power is loose in the world, a power equal to any other, but Dekkeret has no faith in omens. Only when Mandralisca avails himself of a sinister device that destroys the mind of Dekkeret's own High Counsellor does the ne Coronal begin to see a threat. But without THE KING OF DREAMS, how can he combat the sinister power emanating from Zimroel?

This is the completion of the Majipoor trilogy involving Prestimion (Sorcerers of Majipoor and Lord Prestimion). Silverberg says this will be probably the final Majipoor book. And, much as I love the big planet, I can't blame him for wanting to move on.

Lord Prestimion has reigned for twenty years, and Confalume Pontifex is getting very old, which means the inevitable move from Castle Mount to the Labyrinth will come soon. After a long and prosperous rule (barring the difficulties detailed in the first two books), Prestimion is ready to move on, and Dekkeret is ready to assume the Starburst Throne. But trouble is of course brewing, and it follows from the earlier conflicts, since that nasty Count Mandralisca managed to escape the fate of his master.

Unlike Lord Prestimion, which started a bit slowly, this one gets going pretty quickly. Chapters alternate between a number of characters, including Prestimion, Dekkeret (the Coronal-apparent), Thastain (a young man in the service of Mandralisca), Varaile (Prestimion's wife), Mandralisca himself, and others. All are vivid and captivating, and Silverberg (as usual) gives even the hideous Mandralisca a measure of depth, with a tragic childhood dominated by an abusive alcoholic father. One of my favorite characters is Keltryn, the younger sister of Dekkeret's lover Fulkari, who comes to the Castle and starts fencing lessons with Septach Melayn.

SciFi.com published a review in their Issue #222.