Kingdoms of the Wall 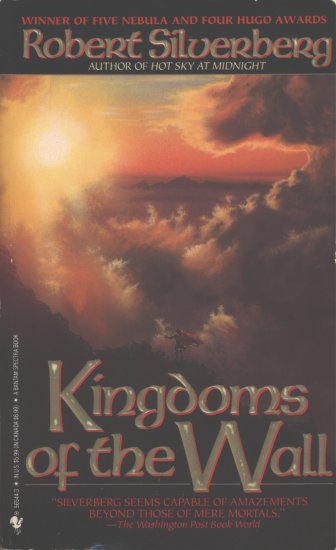 For Poilar Crookleg, the Pilgrimage to Kosa Saag has been a lifelong dream. Each year twenty men and twenty women attempt to reach the Summit, converse with the gods, and return with new knowledge. A few Pilgrims return as madmen. Most are never seen again.

Poilar and his childhood friend Traiben are determined to survive the terrifying journey not as madmen but as teachers of wisdom. Traversing mysterious Kingdoms and blasted landscapes, braving ghosts and monstrous apparitions, they will arrive at the secret of the gods themselves—a secret that will shatter centuries of belief and change their world forever.

The planet on which Poilar and his people live is an unusual one. You might call it split-level. In the lowlands, where he and Traiben were born, is very hot and humid, presumably with a very high atmospheric pressure. Rising above the lowlands is a gigantic mountain range possessing a completely different climate. The lowlanders think of the higher elevations as a single mountain, Kosa Saag, also known as the Wall, and legend has it that the gods live at the Summit. Poilar's distant ancestor, known as the First Climber, ascended the heights and returned with the knowledge that sparked civilization, and each year, his village chooses forty Pilgrims to make further journeys up the Wall. But it's been a long time since the First Climber, and no new knowledge has come down from above. Poilar and Traiben are determined to break the long silence.

One of the more interesting aspects of the story is one that becomes apparent a few pages in: Poilar's people are not humans. They have some shape-changing ability. Most of the time they take a neuter form, and it is only during sexual activities that gender differentiation occurs. They also have sucker pads on their fingers and toes. Their reshaping abilities are less extreme than some science-fictional shape-shifters: their form at rest is humanoid, and they have a skeletal system. Taking an alien viewpoint like this is a challenging thing for a writer to do, for the sense of alienness must be maintained, but there must be enough of the familiar that human readers will relate to the characters and care about their story. Silverberg pulls it off quite well, and they are both human enough to identify with and alien enough to intrigue (unlike the characters in Nightfall). The characters' ability to change shape is central to the story, so that as they experience psychological changes in their journey, their bodies change too.

The long journey to the top of Kosa Saag is filled with the kind of wild invention you expect from a Silverberg book, and all of the bizarre wonders are given scientific explanations plausible enough to work (for me at least). And if the promised secret of the gods is less than a complete surprise by the time you get to Chapter 24, still there is a great satisfaction in seeing Poilar and his companions through their adjustments in world view.