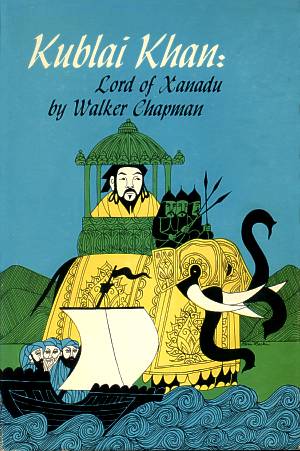 At the beginning of the thirteenth century, the brilliant, barbaric Genghis Khan united the nomadic Mongolian tribes of Asia and swept across the continent, conquering and plundering everything in this path. Soon his empire stretched from the shores of the Pacific and jungles of southern Asia to the icy steppes of Russia and the borders of Europe. When Genghis' grandson, Kublai Khan, assumed leadership of the huge Mongol empire fifty years later, he continued to expand it, crowning his achievement by conquering nearly all of the ancient Chinese nation.

In other respects, however, Kublai Khan was quite unlike his barbaric ancestor. Nicknamed in childhood "the wise one," Kublai grew up under the influence of a Chinese tutor who taught him to love literature and art and Chinese culture. After conquering China, Kublai built in Xanadu a palace, or "stately pleasure dome," as Samuel Taylor Coleridge called it some six hundred years later. It was to this palace that Marco Polo came with his father and uncle, and it was here that Marco Polo served for seventeen years as ambassador to the great Khan.

Walker Chapman has written an exciting historical narrative of a great empire that, although it lasted scarcely a century, arose out of barbarism to extraordinary heights of power and wealth, and became, under the long rule of Kublai Khan, the largest empire in the world.