To the Land of the Living 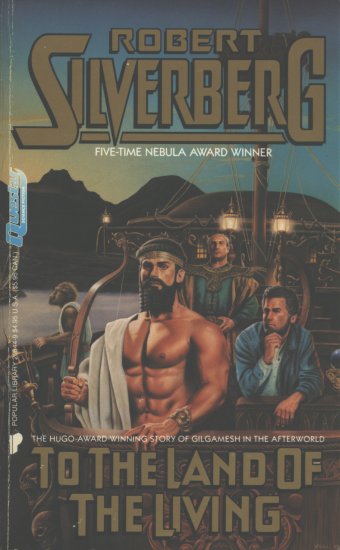 Only one road leads to the Afterworld, the path dreaded by mortals great and small, the way called death. There, in that universe of endless and remorseless life, a land of trickery and sorcery, places come and go as though in dreams, and time itself flows fast or slow according to a demon's whim. There, Gilgamesh of Uruk, king of kings, lord of the Land of the Two Rivers, embarks on an odyssey more fabulous and more harrowing than any undertaken in his first life. There, joined by the eternally ravishing Helen of Troy and the godlike artificer Picasso, he searches for Enkidu, true brother of his soul, and finds himself ascending into a kingdom of frenzy and turmoil, a hellish realm unlike any city he had ever seen – a world suspiciously like our own...

This fits (more or less) into the shared universe of Hell lorded over by C.J. Cherryh and Janet Morris, though it's not mentioned in this book (probably due to somebody's contracts with somebody else). It continues the adventures of the mythical king into a strange version of the afterworld. I call it strange because it does not fit completely with any religious vision of an afterlife. In the other Hell books, there is a basic Christian slant, with demons presiding over the dead and occasional references to a satanic being in charge, but Hell is not just for sinners. Everyone is there, from Hitler to the saints, from the beginning of the human race to sometime in the 21st century. Silverberg takes a more general view, and the Christian elements of Cherryh and Morris's scenario are not present, and in fact this book stands a little outside the general tone of the rest of the series.

One of the basic ideas of the Hell books is that once a person is there, it's forever. If you get killed you come back in a new body after a short time. Another basic idea is that there is no way out. Gilgamesh makes it his quest to find a way out of Hell, a way back to Earth. The irony is that in life, his quest was to make it to the land of the dead to be with his friend Enkidu, and now that he's there, he wants to leave, though he still seeks Enkidu.

The book started as the novella Gilgamesh in the Outback in Rebels in Hell and in that form was nominated for Nebula Award for best novella, 1987. Chapters 1-5 are that novella. Chapters 7-11 were published as The Fascination of the Abomination in Angels in Hell. The title character of Lord of Darkness features prominently in this book as well. I've read a number of the other books in the Hell series, and while they're sometimes enjoyable, I'm not sure I can recommend them. Cherryh's stories are particularly grating to me (which is unusual as she is one of my favorite writers), with their idea that only the famous people of history are important and ordinary people don't even rate bodies in Hell (this is not the way it works in Silverberg's Hell stories, or even many of the other writers in this shared universe).