The Longest Voyage: Circumnavigation in the Age of Discovery 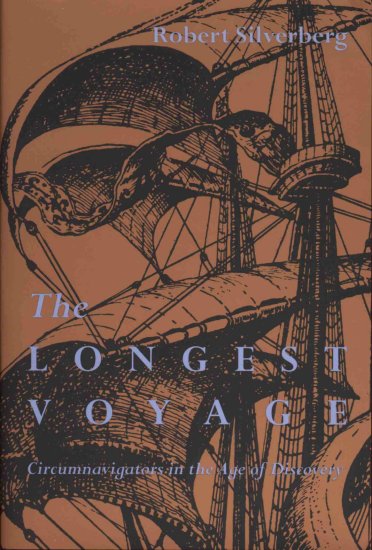 This fascinating narrative captures all the drama and danger, the events and personalities that make up the colorful story of the first voyages around the world.

Quoting frequently from the Pigafetta journal, a highly entertaining and detailed eye-witness account of Magellan's unprecented circumnavigation (1519-1522), Mr. Silverberg gives us an immediate, exciting, and intimate glimpse into that historic venture: the frequent threats of mutiny; the nearly unendurable extremes of heat, cold, hunger, thirst, and fatigue; the fear, the tedium, the moments of despair; the discoveries of strange new people and strange new lands; and finally, Magellan's own dramatic death during a fanatic attempt to convert pagan Philippine Islanders to Christianity.

Sir Francis Drake is our second sea-captain — a glamourous and dashing figure completely unlike the intense, brooding Magellan. Daring, ambitious, energetic, and passionately anti-Catholic, Drake in his circumnavigation (1577-1580) for Englad's Queen Elizabeth was involved as much in piracy as in exploration, yet he became known even to the Spanish as a gallant raider, a gentleman pirate who respected ladies in distress and released prisoners unharmed.

In 1586, as tension between England and Spain was mounting to its peak, Thomas Cavendish set off to plunder Spain's American gold, and in so doing accomplished the fastest circumnavigation to that time. But he lacked both Magellan's fanatic zeal and Drake's daring and finesse, and his voyage was the least productive in terms of both geographic knowledge and financial gain.

Toward the very end of the sixteenth century the Dutch entered the scene, making the contest for control of the Indies a three-way race. The first Dutch circumnavigator, Olivier van Noort, was more a pirate than an explorer — a powerful, brutal man who slaughtered tribes of friendly Indians, and attacked and looted Spanish selttlements in the New World. With the amalgamation of a number of Dutch trading companies to form the powerful United Dutch East India Company in 1602, the Dutch began to be the dominant force in the Indies. Joris von Spilbergen's circumnavigation (1614-1617) was undertaken largely in order to terrorize the rival powers — particularly Spain — and reinforce the Dutch position in the Orient. The sixth and last of the early around-the-world voyages, by Jacob Le Maire and Willem Schouten, resulted in the discovery of the Le Maire Strait, making the way to the Indies easier and less treacherous.

And so the coast of the New World was charted, the Pacific explored, in a century. It was, in many ways, a century much like our own — characterized by the same fierce nationalism and competitiveness, the same bold courage to plunge into unknown territories that marks today's great powers in their race to conquer outer space. Magellan, Drake, Cavendish, Noort, Spilbergen, Schouten, Le Maire – all are here, intensely alive, intensely human, strangely contemporary, captured in these pages within the total context of political climate, social values, and historic change that make theirs one of the most exiting and dramtic epochs in history.