Master of Life and Death 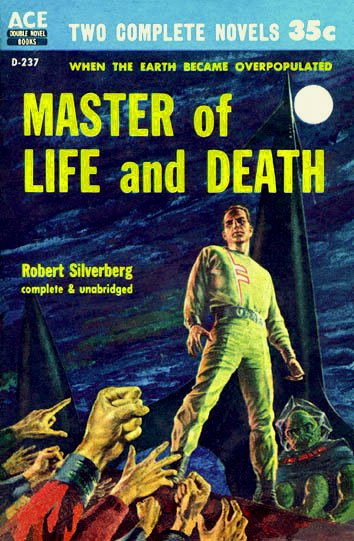 Hour by hour, the computers produced the names of those to die. Simple. Neat. Ruthless.

In a world where human feelings seemed frozen, one spirit flared with defiance and hope...while two powerful brothers fought their old blood feud to a brutal climax.

And hurtling through space...a lost explorer desperately tries to reach earth with word of a new paradise for man beyond the stars.

It is 2232 AD, and the human population of Earth has been unable to curb its constant growth. Living space is at a premium, and a massive effort by DF FitzMaugham has led to the creation of the United Nations Bureau of Population Equalization. Popeek (as it is called) has three main duties: redistribution of people from overcrowded areas to sparsely populated ones, euthanasia of undesirable people, and research into alternative means of alleviating population pressure, including terraforming Venus and the development of faster-than-light travel to search for habitable planets. The undesirables who are euthanized include babies with birth defects and the criminally insane. Although a great many people find Popeek deplorable, there are also a large number who feel that Popeek does not go far enough given the severity of the problem. When FitzMaugham is assassinated, his assistant Roy Walton takes over the reigns of the massive enterprise only to find that things are not what they seem: the FTL project has been successful and the first ship is already out looking for a suitable planet; the Venus team is long past their contact date and presumed dead; and there are several other secret projects going on.

But Walton has other problems, most notably his brother Fred. The two have never been close, and now their animosity endangers the entire planet.

An enjoyable read, well-plotted and full of surprises, though (like most science fiction from the 50s) it's quite short, with little fleshing out of characters or situations. In some ways, I feel the need for a sequel. Walton, the hero of the book, is quite ruthless, very much believing that anything he does is justified for the good of humanity, and I would prefer to see him brought down by his own abuse of his power.