To See the Invisible Man 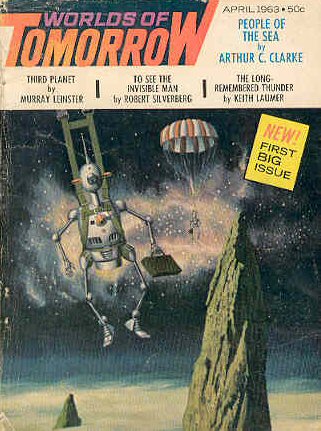 As punishment for his antisocial behavior, a man is sentenced to a year of invisibilty. People can still see him, but they are required by law to have nothing to do with him—no conversation, no contact, nothing. There is a fun side to being invisible—he goes to movies for free, walks into women's locker rooms, and so on, but doctors are not exempt from the law, so when he gets sick, no one will treat him. An interesting concept, this modern version of shunning, though it's hard to see how doctors could reconcile it with their Hippocratic Oath.

The vinyl LP listed above contains a recording of Silverberg reading this story along with Passengers.

This story was adapted as a Twilight Zone episode in 1985 (episode 1.40), which I believe was first broadcast in January of 1986. It was directed by Noel Black, adapted for the screen by Steven Barnes, and starred Cotter Smith. Thanks, Jenelle, for this lead. More info can be found on this fan site or at this site.