The Seed of Earth 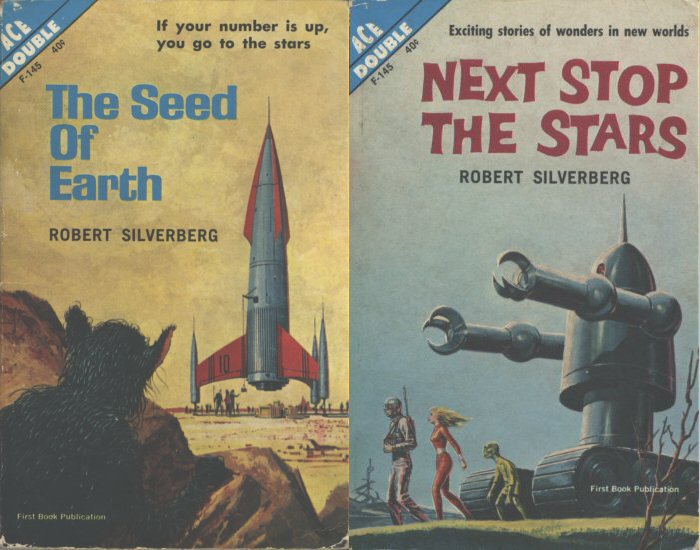 In a dark cave, on a cold planet, in a distant galaxy, four Earthmen sat and pondered the chance that had sent them there. The Computer had picked them to carry human civilization out beyond the limits of the Solar System. They were to be pioneers of a virgin world.

Four humans, alone in a cave, waiting for the outburst that would hurl them at each others' throats, feeling the alien eyes observing their every action, and knowing that whatever they did would determine the future of their entire colony.

The seed (ouch) of this novel was the short story The Winds of Siros. The version published in Galaxy was shortened to about 35,000 words. (Note: The unrelated story Journey's End was originally published as The Seed of Earth, renamed by an editor for no apparent reason.)

Citizens must register for colonization when they turn twenty, and are eligible for Selection until the age of forty. Every day 60,000 randomly chosen colonists leave Earth, one hundred per starship, to planets deemed habitable by survey teams. There is no effort made to include persons with medical or any other specialized training, and once the colonists are dropped off on their new worlds, they are on their own. The reasoning given is that there are millions of planets out there with no other intelligent species yet found, so it is the destiny of the human race to spread its seed as broadly as possible. The lottery system is used because not very many people volunteer for this noble cause. Imagine that.

The situation is intriguing enough – strangers thrust together unwillingly on a new planet, torn from their previous lives and forging new relationships in an adverse setting – but it only takes a little thought to come up with dozens of economic and philosophical reasons that it would never work. Still, I can't help trying to think of reasons to make it work, which says something about the appeal of the scenario. An observation: although the colonists of Osiris were allegedly selected at random from the pool of all Americans between the ages of twenty and forty (fifty men, fifty women), it seems that every one of the colonists in the story is white. Given when the story was written, this may not be surprising, but looking back today it's intriguing to think what a more representative population would be like in such a situation.