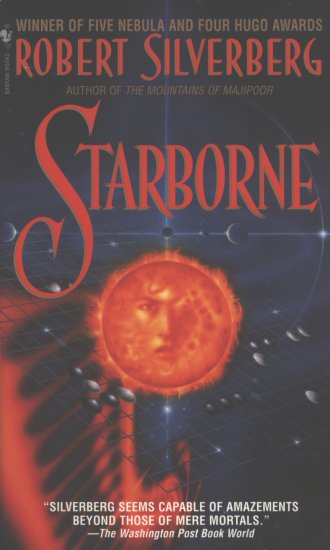 It will be the greatest voyage of exploration in human history. Fifty men and fifty women are chosen to crew the Wotan. Their mission: to travel deep into the unknown galaxy in search of habitable worlds, to rekindle the dying human spirit. Their only contact with Earth is the telepathic link between one of the crew members and her sister back home. But when the mind-link with Earth is abruptly broken, the Wotan is lost in the pearl-gray twilight of nospace. Then, just as all seems lost, the Wotan encounters a massive alien presence. Suddenly the crew is forced to realize that their every assumption about life and death, humanity and the universe, may be dead wrong.

While many of the ideas contained in the story are not new (telepathy between identical twins, hyperspace travel, and so on), Starborne comes off as fresh because of Silverberg's excellent characterization. The year-captain de facto narrator is fully realized, as is the at first enigmatic telepath Noelle. The secondary characters, are interesting and believable, being people with virtues and flaws like any of us.

The story centers on the emotions and attitudes of the crew (fifty men, fifty women) on a journey of uncertain outcome from which they might never return. Their obsession with the game of Go is a brilliant stroke, revealing personalities in ways that conversations or mere descriptions could not. The other center of shipboard life, the public baths, is also used to great effect.

In addition to the intriguing saga of the journey itself, we are treated to two planets full of the wonder and invention we expect from Silverberg. The rope-forest world is particularly fascinating, unlike anything I've ever come across in my reading, but believable nonetheless.

Compared to some of Silverberg's post-Valentine novels, Starborne is fairly short (I completed it with almost perfect timing on a flight from Seattle to Washington DC), but doesn't feel rushed or abridged. I recommend it highly, and it should be easily acquired, unlike some of the older works.