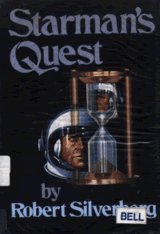 One of the most intriguing of the unresolved questions which will face astronauts on prolonged trips away from Earth is that of time. Will travel in space involve speedups or lags in relation to Earth time — and if so, what will be the effects, physically and psychologically, on the travelers?

In this novel of the future, Alan Donnell, son of a spaceship captain, has a special and compelling reason for wanting to unravel the time-space problem that has baffled men for years. Because time aboard the great starships becomes curiously contracted, a trip to Alpha Centauri affects the men in space as a mere six-week interval—but on Earth, nine years have passed when they return. It has become the custom for Spacers to remain on their ship with their families, living their entire lives within those confines rather than attempting to adjust to the enormous changes that take place on Earth between trips.

Alan's twin brother Steve jumps ship and takes his chances on a bewildering and hostile Earth rather than endure the restrictive life of a Spacer. By the time the twins meet again, Steve is twenty-six and Alan is still only seventeen. Determined to keep his family intact, Alan braves the dangerous Earth city and stakes his life on the possibility of making the two ways of life compatible.

Here is an inventive science-fiction novel with real human-interest complications, by a master of the field.

There is some interesting social extrapolation in this book. Earth of the 37th century is a heavily populated place where employment is difficult to come by and virtually all jobs are taken by the members of hereditary guilds. This is combined with a kind of enforced consumerism: it is considered improper to save money; in order to preserve the jobs of others, everyone must buy, buy, buy. Interstellar travel is possible but expensive, so few can escape the crowding or relentless economic pace by moving offworld. The only legal profession open to the non-guilded is gambling (which of course does a very good job of keeping currency circulating).

It's hard to imagine this book being reprinted today. Although the story is engaging, combining realistic science with fairly well-drawn characters, there are a number of features that take it far enough out of political correctness to make it anathema to publishers. Primary among these failings is the fact that Alan, once on Earth, supports himself as a gambler. In the context of the book, this is a perfectly logical choice, but it's certainly not something you'd see today. So Our Hero finds himself in a world of smoky game parlors, casual drinking and drugs, and criminal activities. As a side note, there is no mention of sex or prostitution in any of this. In fact, aside from one annoying teenage girl with a crush on Alan, there are no female characters in the story at all. (This is probably as much a reflection of the market for which Silverberg wrote it as anything else.)

Putting the social issues aside, the science in the book is good. Silverberg takes the famous Twin Paradox of relativity and puts it into a book intended for young readers. The fact of time dilation is the central problem of the plot, though I noticed not a single mention of Albert Einstein by name.

Now for a spoiler-containig observation... When Alan gets started building the hyperdrive which will end the necessity of time dilation for space travelers, he doesn't do it all himself, like you might expect in a Tom Swift type adventure. He hires mathematicians and other experts to help him. That is a nice touch that departs from the long-accepted tandards of the genre.