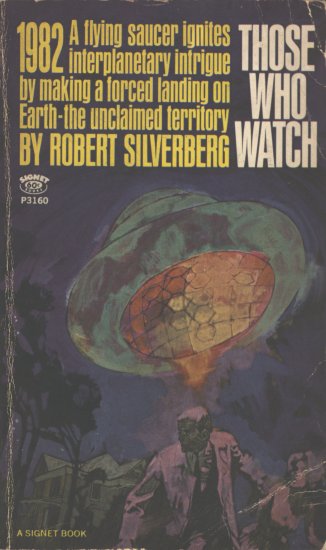 THOSE WHO WATCH is the strange, seductive novel of three inadvertent colonists from outer space whose accidental encounter with Earth triggers interplanetary conflict. It also the most unusual love story ever written.

VORNEEN — the seducer, in the shell of an Apollo who came out of nowhere into the life of Kathryn Mason

GLAIR — the perfect woman, an empty form who filled the hours of Tom Faulkner [sic]

ONLY THREE HUMANS WOULD EVER KNOW that the blinding flash in the sky on that night in 1982 was an exploding flying saucer. Only they would learn the truth about THOSE WHO WATCH—about the alien beings who came to this world in a crash landing from the stars.

I can't say what reading this book would have been like back when it was written, but today it reads a lot like an episode of The X-Files. All we're missing is the intrepid FBI agents tracking down the aliens. In many ways, Those Who Watch is a good light read. The plot buzzes along nicely, and the characters are for the most part well-drawn. The whole thing tends to fall apart if you examine it closely however, and it is this that keeps the book from joining the ranks of Silverberg's finest.

As with a number of the other earlier works (notably The Seed of Earth), I find it frustrating to read. There really is the core of a good story in here, but Silverberg just hadn't found the proper way to tell it yet. I like the idea of the aliens watching the earth with strict rules against being detected; I like the idea of the emergency landing separating the aliens; I like the idea of humans nursing them back to health. Problems crop up if you analyze or ask many questions. How could Colonel Falkner get Glair to his home without raising suspicions? How did the American military search turn up nothing? What happened to the ambitious Captain Bronstein? If these questions and others had been worked out more carefully, the story would have been a lot more suspenseful. I can picture Falkner holed up in his house with Glair, all unaware that the authorities are closing in on him. There's also a rather blatant "smoking gun" in Chapter Nine that is never followed up. But enough of what's not in the book.

The alien culture is intriguing but mysterious, never explained very much. Their motivations for watching us are more hinted than spelled out. The story takes place in a 60s version of the 80s, with some technology more advanced than really happened (common electric cars, personal jet aircraft) and some less advanced (no satellite communications). The six main characters are well-rounded, though some of the secondary characters are little more than placeholders.

All in all, it's a quick enjoyable read, though not among Silverberg's great works. This is the last of what I think of as Silverberg's early novels. After Those Who Watch he moved into the classic period of the late 60s and early 70s.