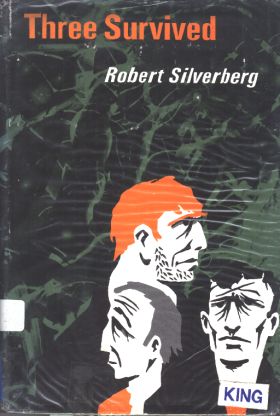 You threaten our safety, the alien said firmly. And so you must die!

Not here, Rand thought. Not now. Not like this. Not in a sticky jungle on an unknown planet for a stupid reason.

The ring of guards lifted their swords. The cruel barbs glittered in the hot sunlight. Here it comes, he told himself.

Tom Rand, practical engineer, and two other men are the only survivors of a spaceship explosion. Marooned on the hostile planet, Tuesday, they are being held captive by a group of aliens. Their one slim chance of survival is to reach a rescue beacon that had been placed on Tuesday years before by men from Earth.

Can the three survivors escape what seems like a certain, immediate death? And if they do, can they make their way through a jungle filled with untold dangers and reach the beacon in time?

Tom Rand — and the reader — are in for some surprising answers.

The two other men are Anthony Leswick, a bookish student of the impractical science of Metaphysical Synthesis, and William Dombey, an uneducated deckhand (jetmonkey). Rand spends much of the early part of the book bemoaning the uselessness of his companions. Luckily, it turns out that each of them has skills that are as useful in some situations as Rand's logic and math. The story centers around Rand learning to respect the other men for what they can do instead of dismissing them for what they can't.

For a juvenile book, I found the story quite harsh in some ways. The disaster on the spaceship, and the ensuing death, is described in some detail, and there are hard decisions to be made. Once the men get to the planet, however, things are comparatively easy for them. Which makes sense—when you're in space, the slightest mistake can mean instant death, whereas on an Earth-like planet, even an unknown one, you can at least breathe. All in all, not a classic, but a decent read. It is almost certaintly based on the 1957 short story of the same name, and it should be considered more a product of that time period than its actual publication date.