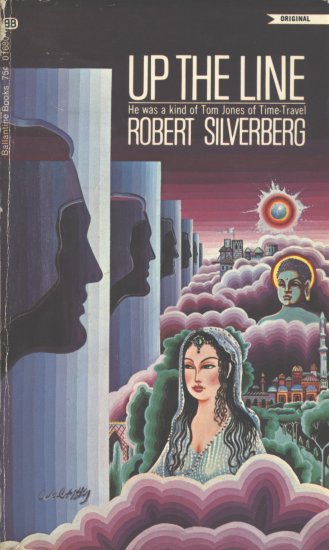 Judson Daniel Elliott III thought of himself as being a pretty square type. But he was simultaneously attacked by restlessness, weltschmerz, tax liens and unfocused ambition. This left him with several horrible alternatives.

In the circumstances, he was glad to accept the advice of Sam, his friendly black guru, who introduced Jud to the Time Service, Sam himself being a part-time Time Serviceman.

And a roistering, bawdy lot they turned out to be. Judson was alarmed and delighted. In fact, he was astounded at the ease with which he took to the swinging life of a Time Courier — and before he knew it, he had, of course, landed himself in a marvelous temporal paradox whose name was Pulcheria...

Nominated for Nebula Award for best novel, 1969. I'm not sure if it's really the best thing Silverberg had to offer that year, but it's a fun read, probably his funniest book. It has a serious side, too, and it's not just silliness. Jud Elliot is a prototype for Yakoub in Star of Gypsies – a thoughtful rogue, who philosophizes as he sex-and-drugs his way through history.

Of course the idea of time travel as tourist trade is completely ridiculous, but Silverberg makes it work. He uses some of the tropes of science fiction which have been established over the decades (starting with HG Wells), and throws in tons of amusing pseudo-tech talk to make it seem plausible. One thing to remember: time is like a river flowing downhill – the past is upstream (up the line), and the future is downstream (down the line).

The world of 2059, where Judson lives down the line, is a very liberal place. Drugs are used casually and frequently; people have sex whenever they feel like it and can find a willing partner; public nudity is commonplace. In addition, gene-splicing and cosmetic surgery make for a generally healthy and attractive population. Some of the more restrictive eras up the line take a little adjustment for civilized visitors. Remember to cover those nipples! Stay away from the weed! It's technically illegal to engage in intimate relations with natives up the line, but it seems to be one of the main attractions for time travelers. Everybody wants to have sex with exotic people of past times. Fortunately, time travelers have their shots to prevent disease and conception, so no anomalies will pop up. In theory.

As Jud bumbles through Byzantine history, just about every conceivable time paradox comes up. He meets himself on a previous jaunt; he watches a tourist get killed and pops back to prevent it; he accidentally creates a duplicate of himself. And throughout it all, he maintains his obsession for dark-skinned women with high breasts.

What can I say? This book is a real kick to read, and should remain in print forever. It's one of the best time travel novels there is. (And Silverberg manages to use the phrase needle in a timestack in it.)

In addition, this book was the basis for a stab at the fad in the 90s spawned by the success of the Goosebumps books. A series of books were written by different authors under the heading of Robert Silverberg's Time Tours: