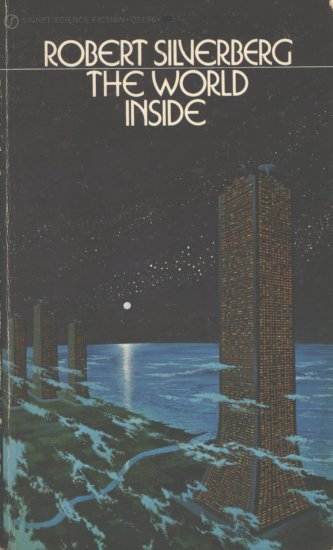 Urban Monad 116: A lofty spire a thousand stories high where 880,000 souls live out their perfectly regulated lives in peace and plenty. But inside this glorious world are a few who dare to doubt and dream:

Dillon Chrimes, cosmos group popstar, who becoes one with the urbmon in an orgiastic, mind-shattering trip;

Jason Quevedo, historian, who gets his kicks from the perverse savagery of an earlier age;

and Michael Statler, who dares to escape...

Many of the chapters of this book were published as individual stories, including Chapter 1, which is A Happy Day in 2381. And in fact some bibliographies list this as a short story collection rather than a novel.

Nominated for a Hugo in 1972 for best novel, but withdrawn by Silverberg in favor of A Time of Changes, which was also nominated that year. As it turned out, neither won.

Scottish musician Philip Jackson (under the moniker Paradox One)has released a piece of music called "Urbmon 116" inspired by this book. It's a sort of cross between electronic music and progressive space rock, available through Neurosis Records.

SciFi.com published a review in their Classics section of Issue #332.