Phases of the Moon 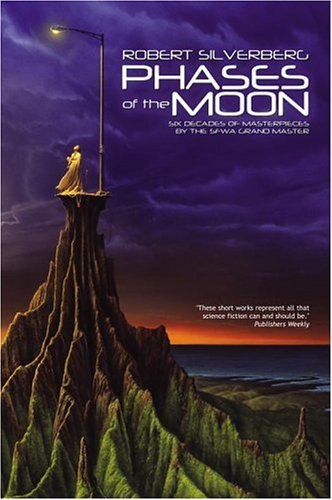 A COMPREHENSIVE COLLECTION OF
THE BEST ROBERT SILVERBERG
STORIES FROM THE PAST SIX DECADES,
SELECTED BY THE AUTHOR HIMSELF!

"All through my adolescence there was little I wanted as badly as to see a story bearing my name appear in one of the science-fiction magazines...

"But even after making those 550 sales — or 650, or 750, or however many it was — I still have not lost touch with the adolescent boy within me, the one who bought those issues of Astounding Science Fiction and Thrilling Wonder Stores in the far-off 1940s and dreamed of being a writer some day, by which he meant selling a story or two to one of those magazines. Whenever I see my name on a magazine cover, he reacts with astonishment and delight. So now, looking back over my long career, bringing together a representative sampling of stories from each of the six decades — so far — in which my work has found publication, I shake my head in wonder at the way it all turned out, and give silent thanks to all..." — Robert Silverberg

In addition to early efforts ("The Road to Nightfall," "The Macauley Circuit") and classics ("Good News from the Vatican," and "Sailing to Byzantium," to name but two), this amazing collection includes a small volume's worth of the 2004 Science Fiction Writers of America Grand Master's introductions and memoirs.