The Geography & Geology of Majipoor

The planet Majipoor is quite a bit larger than Earth, as much as ten times the diameter of our world. In spite of its large size, the gravity is near Earth normal, which means the planet must have a very light core, very poor in metals. Normally, such a scarcity of metals might mean a low technological level, but the stories set there take place some fifteen or twenty thousand years from now, and there are ways around the problem. 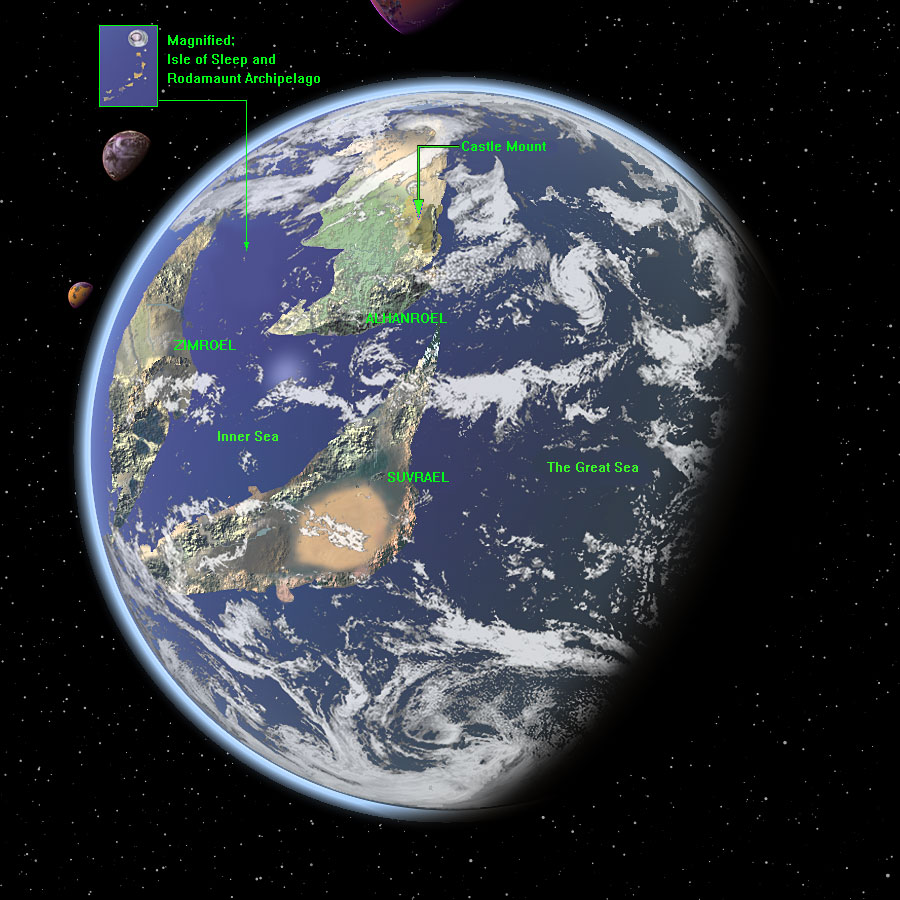 Ocean covers an entire hemisphere of Majipoor, and with Majipoor being a big planet, that makes for a really big ocean. It's called the Great Sea, and no explorer has ever crossed it by boat (though at least one has tried—see In the Fifth Year of the Voyage). As far as we know, the dominant species of the Great Sea is the sea-dragon, a huge, whale-like creature of some intelligence. There are also vast areas covered by a kind of thick seaweed, like a Majipoor-sized Sargasso Sea.

The ocean area bounded by Alhanroel on the east, Zimroel on the west, and Suvrael on the south is called the Inner Sea. By Earth standards it also is a very big ocean. Roughly in the middle of the Inner Sea are the Isle of Sleep and the Rodamaunt Archipelago.

Alhanroel is the largest and most populous of the continents, and was the first settled by space travelers. Castle Mount, a huge mountain thirty miles high, is located on Alhanroel. The first travelers found the ruins of ancient cities on Alhanroel (most notably the one known as Velalisier, featured in The Seventh Shrine), but it is not known if they were built by an advanced society of Piurivar or by previous visitors to Majipoor. Mount Zygnor, another large mountain, is in the northeastern corner of the continent.

Zimroel is the second largest of the continents, a vast land which contains the Metamorph Reservation. At the northern tip of Zimroel lay the Khyntor Marches, a high, wintry plateau cut off from the rest of the continent by a band of mountains. Zimroel is bisected by the great river Zimr, which is like the Amazon blown up to Majipoor size.

The southernmost continent is comprised mostly of the Desert of Stolen Dreams, with a narrow band of grazing land around it and few cities along the northern coast. In many ways, it is Majipoor's Australia, a southern continent with a large desert making up its Dead Centre.

The Isle of Sleep

The Isle lies in the Inner Sea between Alhanroel and Zimroel. It is a circular island terraced into four levels, each of which consists of many sublevels. At the top is the Inner Temple, home of the Lady of the Isle of Sleep. The mile-high white chalk cliffs around the island are broken in two places: to the southwest for the port of Taleis, and in the northwest at Numinor.

To the south of the Isle of Sleep in the Inner Sea lies a long chain of islands known as the Rodamaunt Archipelago. The southern part of the group consists of low coral-based islands; the northern half is rocky and volcanic. In about the middle is Rodamaunt Graun, the largest of the chain.